Wrapped Up in Stripes

As the daughter of the Alpha of the Blue Valley lion pride, Heidi should have the pick of the litter when it comes to dating, but her brothers think differently. Surprised with a trip on a very exclusive cruise, she’s excited to explore her fantasies. Bondage? Submission? Ménage? …yes, please! If this is her chance to experience everything she’s ever fantasized about, then Heidi is going to go for broke.

Who has time for pleasure? There’s far too much work to do. Wild Desires cruise line is having issues, and Mason and Wade plan to get to the bottom of it. They didn’t anticipate finding a lioness that has his tiger utterly fascinated. Neither of them seems to be able to resist the temptation sweet little Heidi presents.

Why fight fate when it presents them with such a tasty treat? —good thing they’ve always preferred to share. 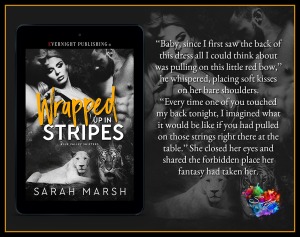 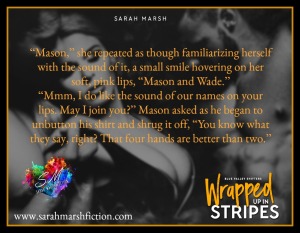 Sarah Marsh was born in British Columbia, she has only recently began her writing career finding it the perfect outlet for taking the edge off a nine to five office job. She’s been a science fiction and romance junkie for years and when her imagination started to take the characters she’d read about even further in their adventures she decided to try writing something of her own.

Sarah’s also a former pastry chef and spends a lot of time cooking and baking for friends and family as well as painting and knitting. Her biggest weaknesses are animals of any kind…she even loves the ones that wake you up at four in the morning because they can almost see the bottom of their food dish.

When it comes to life in general she’s a big believer that laughter is the best medicine and that there’s no such thing as too much love, which is why she’s such a sucker for a happy ending.